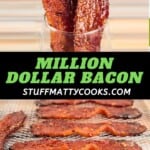 Million Dollar Bacon is so darn delicious. This candied bacon recipe has a style all its own. Let me tell you it goes with anything. Whether you are cooking it to go with your breakfast, brunch, bloody mary, or even a beer you are going to absolutely LOVE it.

This version of candied bacon is called million dollar bacon and it is the perfect blend of sweet spicy, and salty with a bit of heat. This makes for a perfect crunchy snack.

The first time I had a version of it was at a restaurant bar called Twin Peaks that is native to my hometown of South Florida.

It was called billionaires bacon on their menu and I ordered it to have with my beer as a snack, to be honest. It was such a good snack to have with an ice cold beer. This is some fancy bacon even though it is simple to make.

No matter if you call it bacon candy, pig candy or just candied bacon this is a delicious million dollar bacon recipe I assure you. If you are a fan at all of smoked pork belly, hind leg, or any kind you will love this.

Since that day every time I go I get an order. I have also heard that the popular Breakfast restaurant First Watch is known for its bacon so you may have had something similar there.

What is Millionaires Bacon?

Millionaire Bacon is made using Thick Cut pork bacon. (I do not recommend thin slices or Canadian bacon.) It has become very popular across the country and is really just a fancy name for candied bacon.

What Kind of Bacon is Best for Millionaires Bacon?

Thick Cut Bacon cooks best for this million dollar bacon recipe. Bacon that is thick enough to handle all the seasoning. This kind of bacon is popular these days. Even Dunkin has a version of it now, but I didn’t like theirs at all when I tried it.

Thick cut bacon can be found at places like Trader Joes or Whole Foods in the cold section. Whole Foods also sells good quality bacon at the meat counter that is thick cut and great for this candied bacon.

Jump to Recipe Card for quantities

How to Make Million Dollar Bacon

Since that day I tried this “bacon candy” I was thinking that I was going to come up with something similar. I had to give this gift of yummy to the world.

So while myself and my whole state of Florida were sitting around on quarantine during the Coronavirus pandemic thing I thought to myself cooking bacon is a great idea. I had some good bacon in the fridge lets do this.

Apparently the so called “original” recipe was made by a restaurant in San Francisco called the Sweet Maple Restaurant. Although I have never been there and had their version.

If I make it out west in the future I will definitely go there and try their version of millionaire bacon.

Cooking Tips for Cooking Candied Bacon in the Oven

What to Serve with Million Dollar Bacon

The truth is this bacon pairs well with so many things. It is great for breakfast and brunch recipes.

Great on its own but even better with a Bloody Mary.

Other Recipes to Enjoy

How to Store Candied Bacon?

Millionaires Candied Bacon can be stored in an airtight container in the refrigerator for about 4 days.

How to Reheat Candied Bacon?

Bacon can be reheated in the microwave in intervals of 10 to 15 seconds until the desired temperature.

Reheating Bacon in the Air Fryer

This is my favorite way to reheat bacon. Reheat in Air Fryer at 370 Degrees for 3 to 4 minutes cook time. 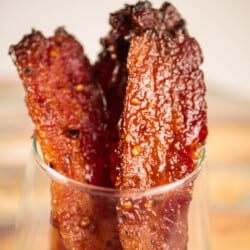 Make sure you watch the bacon near the end of the cooking time. You do not want the sugar to burn. Letting it carmelize is good but burn is not. Keep an eye on it the last few minutes. The Maple syrup drizzle at the end is an option. I happen to like the spicyness and don’t do it but try it both ways and see what you like. Use REAL Maple Syrup.

We use cookies on our website to give you the most relevant experience by remembering your preferences and repeat visits. By clicking “Accept”, you consent to the use of ALL the cookies.
Do not sell my personal information.
Cookie SettingsAccept
Manage consent

This website uses cookies to improve your experience while you navigate through the website. Out of these, the cookies that are categorized as necessary are stored on your browser as they are essential for the working of basic functionalities of the website. We also use third-party cookies that help us analyze and understand how you use this website. These cookies will be stored in your browser only with your consent. You also have the option to opt-out of these cookies. But opting out of some of these cookies may affect your browsing experience.
Necessary Always Enabled
Necessary cookies are absolutely essential for the website to function properly. These cookies ensure basic functionalities and security features of the website, anonymously.
Functional
Functional cookies help to perform certain functionalities like sharing the content of the website on social media platforms, collect feedbacks, and other third-party features.
Performance
Performance cookies are used to understand and analyze the key performance indexes of the website which helps in delivering a better user experience for the visitors.
Analytics
Analytical cookies are used to understand how visitors interact with the website. These cookies help provide information on metrics the number of visitors, bounce rate, traffic source, etc.
Advertisement
Advertisement cookies are used to provide visitors with relevant ads and marketing campaigns. These cookies track visitors across websites and collect information to provide customized ads.
Others
Other uncategorized cookies are those that are being analyzed and have not been classified into a category as yet.
SAVE & ACCEPT